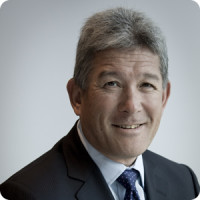 Gary has worked in the transport industry for 29 years, initially for 11 years with Trans Australia Airlines (now the domestic arm of Qantas), where he was National Accounts Manager. He joined DHL in 1986 as Sales Manager, Victoria.

Gary became State Manager of DHL in Victoria in 1987 before taking on Australasian sales responsibilities, based in Sydney. In 1993 he moved to New Zealand as Country Manager, and in 1998 was promoted to Country Manager, Australia.

In 2000, Gary transferred to Tokyo to help establish a new DHL Logistics group, Global Customer Logistics (GCL), of which he became a Director.

He returned to Australia at the end of 2001 as Project Director of Deutsche Post World Net (DPWN), responsible for the Hewlett Packard logistics contract held by DPWN for Asia Pacific. (DHL is wholly-owned by DPWN).

He holds two Diplomas – one in Marketing and one in Business Administration.

He is married, with three children and one dog.